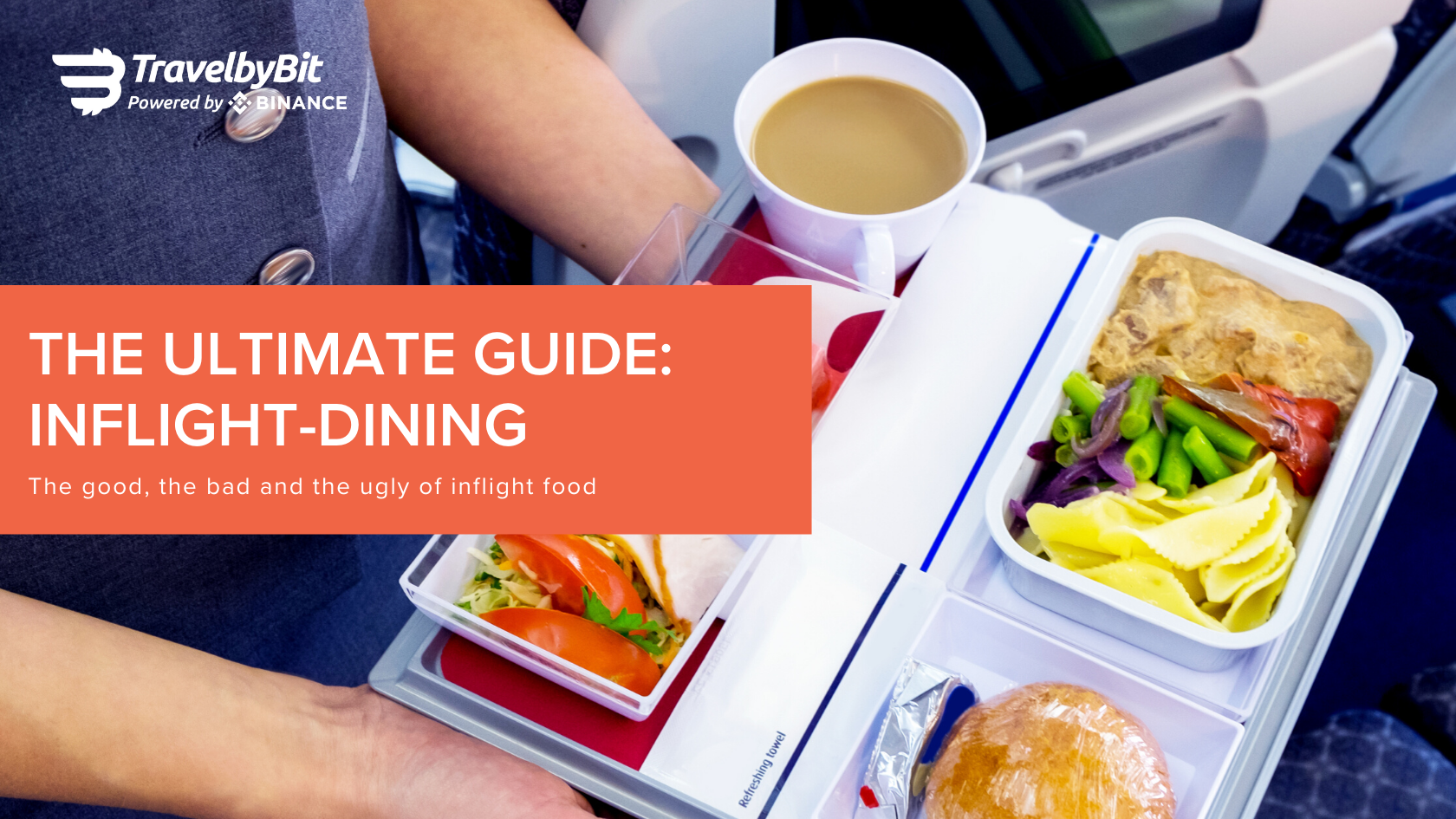 12 March 2020
Ultimate guide to In-flight dining: the Good, the Bad and the Ugly

In-flight meals are notorious for being unappetizing. According to Refinery29, famous chef and TV personality, Gordon Ramsay, would never eat on planes. He mentioned that due to working in the airline industry for 10 years, his knowledge of how the food is prepared (and how long it takes before it gets onboard) turns his stomach at the thought of eating it. So, how exactly does our in-flight meal get to us and what are some of the best and worst meals out there? This article will hopefully answer all your queries on in-flight dining.

Do flight conditions affect your ability to taste?

Yes! Being 30,000 feet in the air affects your ability to taste and smell. The combination of the altitude, air pressure and the lack of moisture contribute to why it’s so hard to keep the flavours in meals being served in planes. A pro tip from the Guardians is tomato juice actually tastes better in air. A physiologist at Cornell University discovered that loud plane engines affect our taste perceptions too. While we might not be able to taste the sweetness in our soft drinks, the umami flavours in tomato juice are enhanced in air. 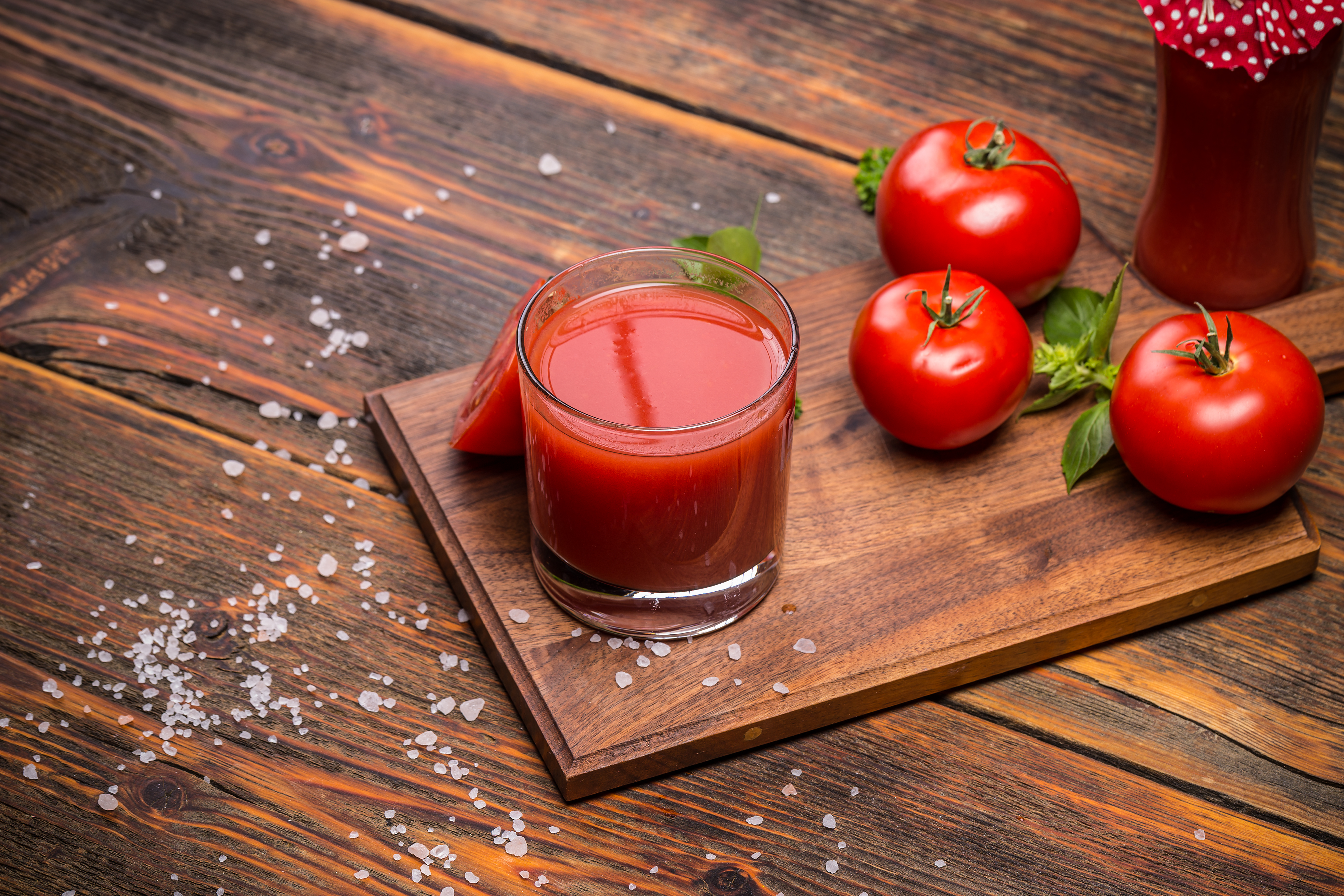 Fun Fact: Lufthansa, a German Airline, noticed that passengers were consuming a similar amount of tomato juice as beer.

Food is a big component of the overall inflight experience. According to Statista, The global airline catering market was worth 17.7 billion US dollars in 2018 and is expected to grow to 24.3 billion by 2024. It’s clear that airlines invest a lot of money and effort into their menus by bringing in professional chefs to develop menus suited for their airline.

Despite the bad reputation of in-flight meals, some airlines take pride in providing the best dining experience for their passengers. For the passengers, airline meals are a chance to experience the food culture of your destination before you land. Here are 5 of the most highly rated airlines with fantastic meals on board.

Thai Airways scored the top ranking from Skytrax, a global airlines rating programme started in 1999. The award-winning meals deliver the authentic flavours of Thailand as well as other international dishes. Thai Airways sourced most of its seasonal ingredients locally in Northern Thailand to support local farmers. Thai Airways also received 4 stars on trip advisor for their food and beverage selection.

Airline reviewer Nik Loukas documented a detailed food review of Thai Airways and the reviews are generally positive. The cuisine changes based on the destinations the passenger is heading to. On a short 55-minutes flight from Vietnam to Hong Kong, He was served a Vietnamese-style meal. Even though the dish doesn’t appeal to his taste, he thinks it’s a great value for money for a decent portion. He also enjoyed the lemon chicken and dessert tiramisu that was served on his flight from Bangkok to Hong Kong. 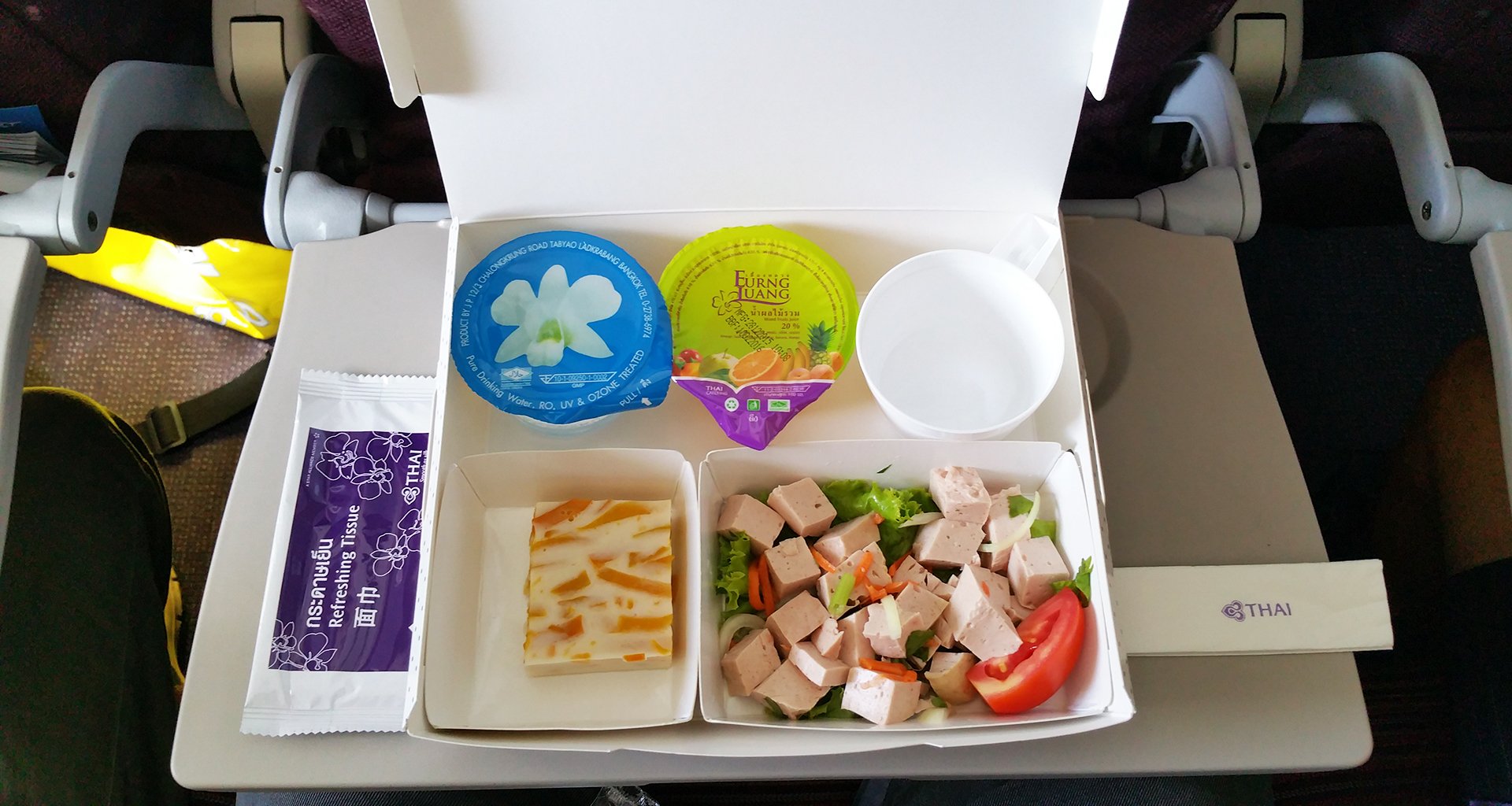 A crowd favourite, Turkish Airlines has the tastiest meals that you’ll ever have in economy class according to Nik Loukas, who has taken 600 flights through 50 countries. His pro tip is to order their home-made lemonade when you’re on board.

On their website, Turkish Airlines mentioned that on certain flights, they would invite expert chefs to prepare and serve passengers world-class meals. It clearly shows the airline’s ambition to continuously impress travellers from all around the world.

Turkish Airlines has 3-stars on Skytrax and 4-stars on TripAdvisor for their food and beverages.

Asiana Airlines is South Korea’s second-largest airline. Based in Seoul, the airline provides authentic Korean cuisine, along with a range of Chinese and Western meals depending on your flight class.

A popular signature meal is Yeongyang Ssambap, which is a vegetable wrap with assorted nuts and sauce. This dish has been awarded the Mercury award from the international Travel catering association. It’s worth a try when you’re taking a long-haul flight departing from Seoul. 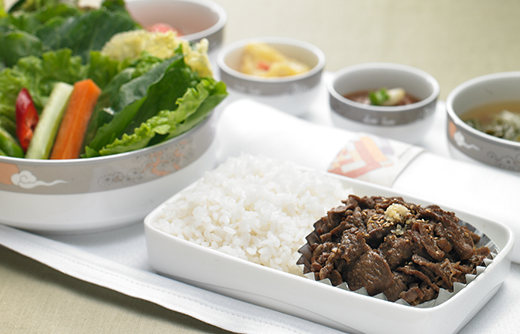 Skytrax has crowned Qatar Airways as the best airline in 2019, it’s no surprise that they serve one of the best in-flight dining experiences.

Following a popular trend of sustainable travel, Qatar Airways uses trays, mugs and boxes that are 99% recyclable. The airline promises to take travellers on a culinary journey. If you’re taking a medium or long-haul flight, you can choose your meal from a variety of cuisines: European, Indian, Middle eastern or even far Eastern. By constantly innovating and improving the dining experience, the airline has achieved 4-stars on both Skytrax and Tripadvisors with their food and beverages review.

In April 2019, Qatar launched a new economy onboard experience called “Quisine”. Passengers on all long-haul flights will be presented a redesigned menu with a service timeline and the meals will have a 25% to 50% increase in portion size. It shows the airline’s dedication to changing both the quality and quantity of the in-flight meal. Considering that American Airlines saved $40,000 by eliminating one olive from each passenger’s salad 30 years ago, this advancement in the menu will likely cost a fortune for the airline.

For the meals, you can expect them to come with regional dips like hummus. For economy class, you can choose from at least 2 options, with meals like Indian pakora or Malaysian chicken curry. Your meal will include the main entree, at least one side dish, a dessert and an additional snack such as cheese or fresh fruit. 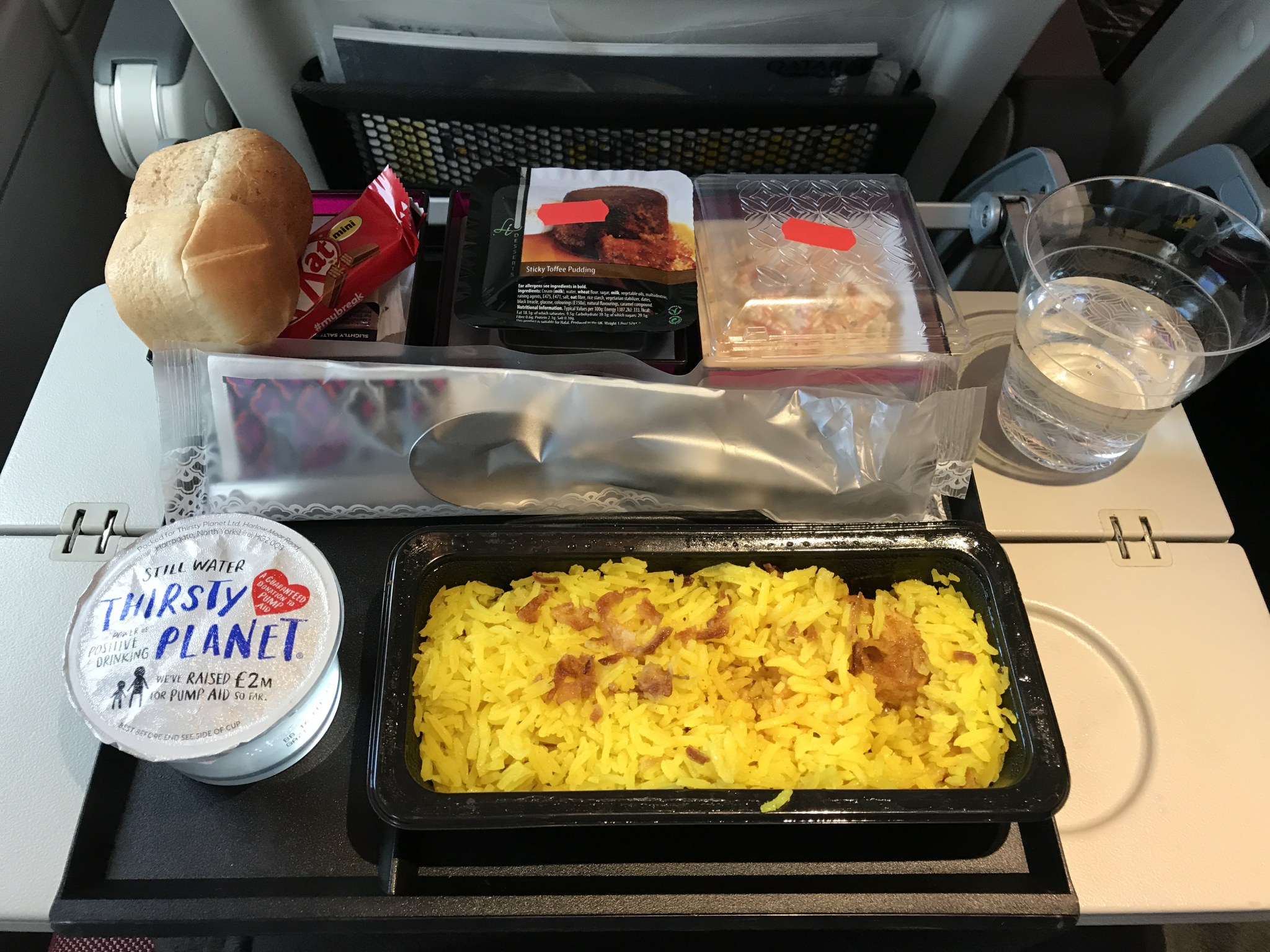 Japan Airlines has definitely put a lot of thought into their in-flight menu. They’ve invited 6 talented young chefs from RED U-35, Japan’s largest culinary competition to help develop in-flight meals that passengers look forward to. Some of the cuisines that are being served are Japanese, French, Italian and Chinese. 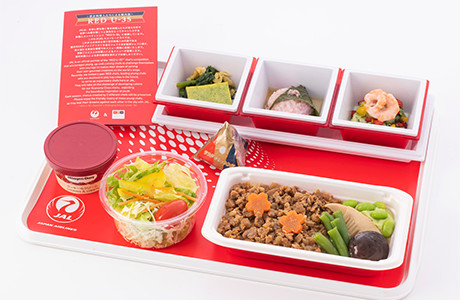 Other than working with the newly discovered talents, Japan Airlines also collaborates with Shinobu Namae, head chef of L’Effervescence. L’Effervescence is a two-star Michelin restaurant and the winner of the Sustainable Restaurant Award and Asia’s 50 Best Restaurants. This menu is only available to travellers flying their Hawaii route. 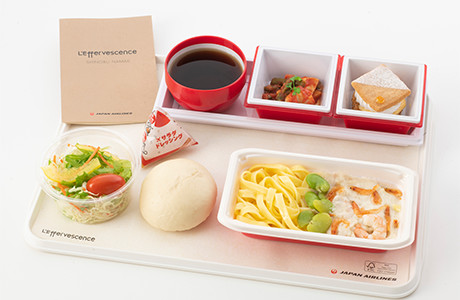 Japan Airlines has listed their menus for different routes around the world and when it will be served. Usually, meals are served an hour after take-off. for flights departing at midnight, it will be served 2.5 hours before arrival.

Japan Airlines also teamed up with Dean and Deluca, an upscale grocery store chain with 50 locations across Japan. The limited-edition meals include spicy cajun chicken, turmeric rice and a side of fresh coleslaw. Dessert will be coffee jelly with sweetened milk. This meal is only available for selected flights to North America, Europe, and Australia. 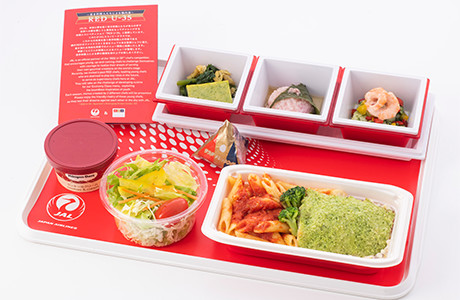 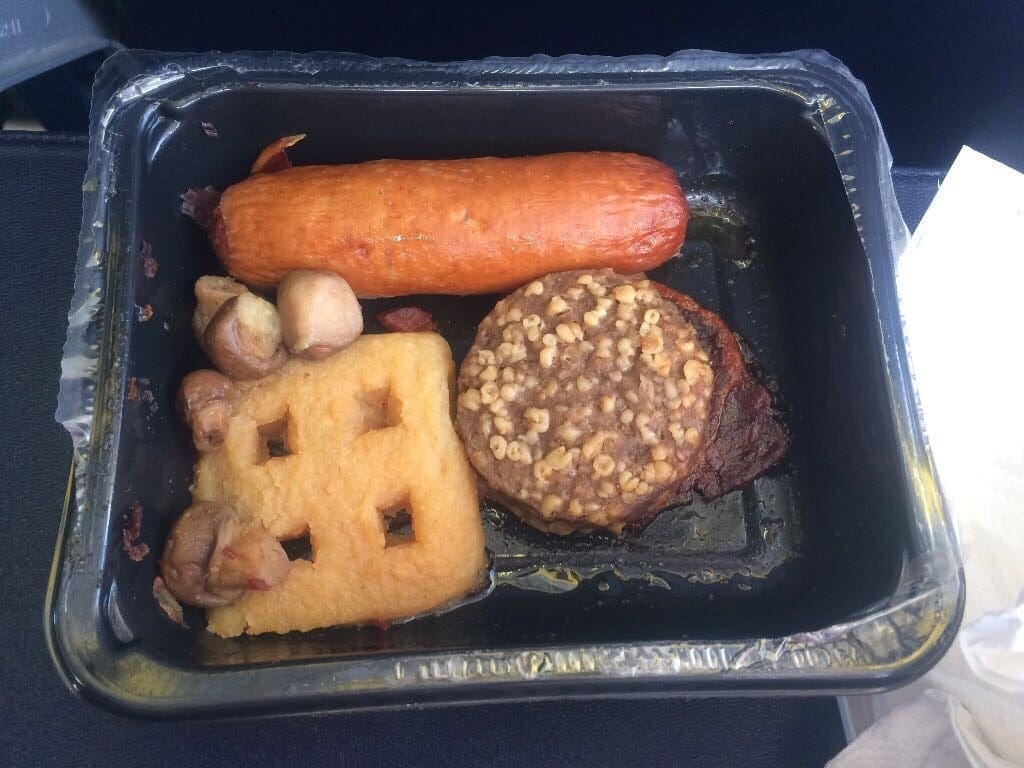 A passenger Billy Shearer described the Irish breakfast meal as “a soggy potato waffle, sausage, congealed white pudding, and shrivelled mushrooms”. It also cost him 10 Euros for the meal as it’s not included in the ticket. Contradicting what the airline claims that the breakfasts are “the perfect option to fill up and start your day with''. According to Ryanair, the Irish/English breakfast includes smoked bacon, white pudding, sausage, hashbrown and cherry tomato. Judging from the images and reviews, it’s safe to say that Ryanair passengers should wait till they land to get breakfast instead. 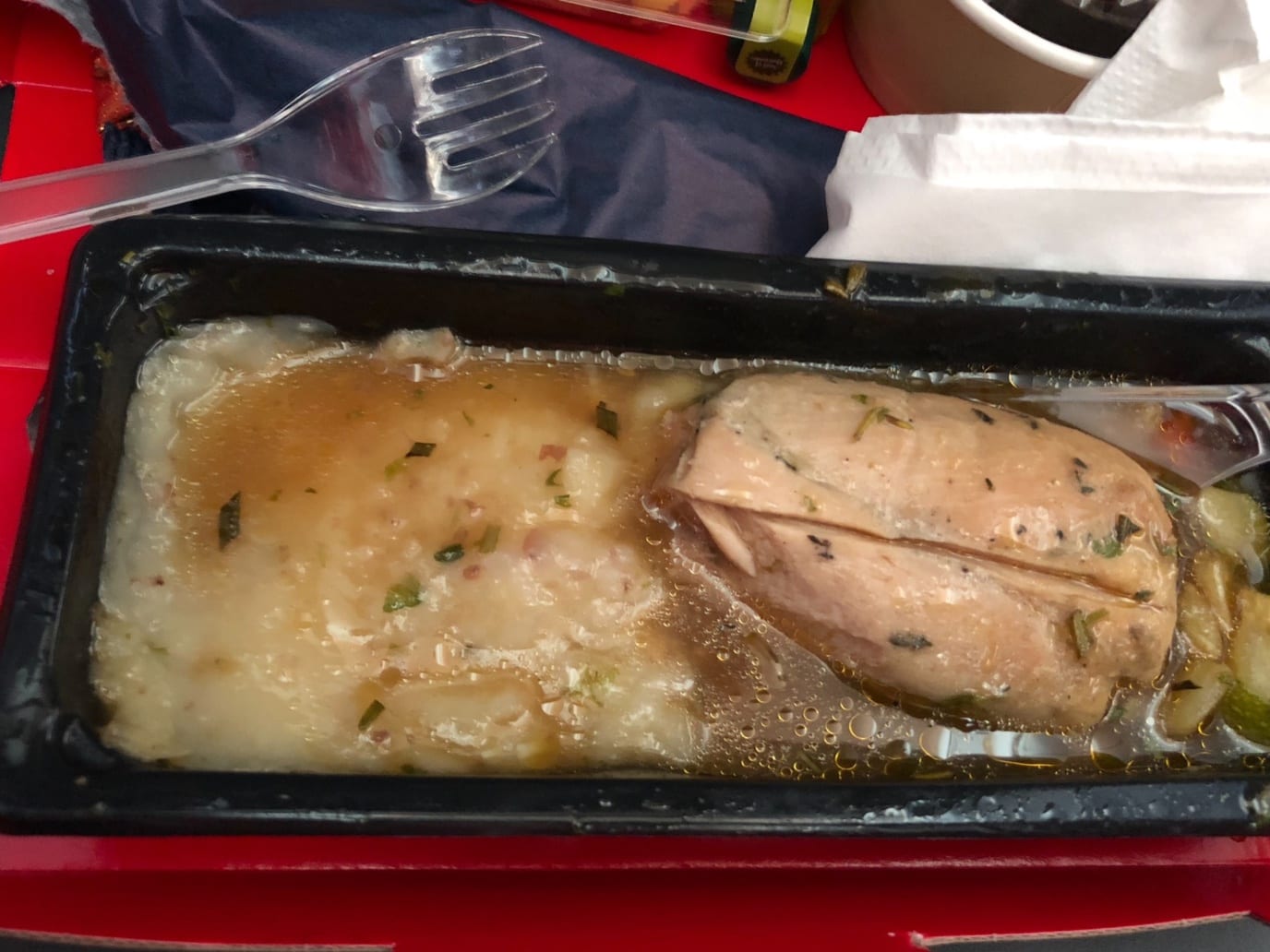 A passenger was very disappointed to find her chicken and mash was swimming in grease, a meal she described as ‘slop’. 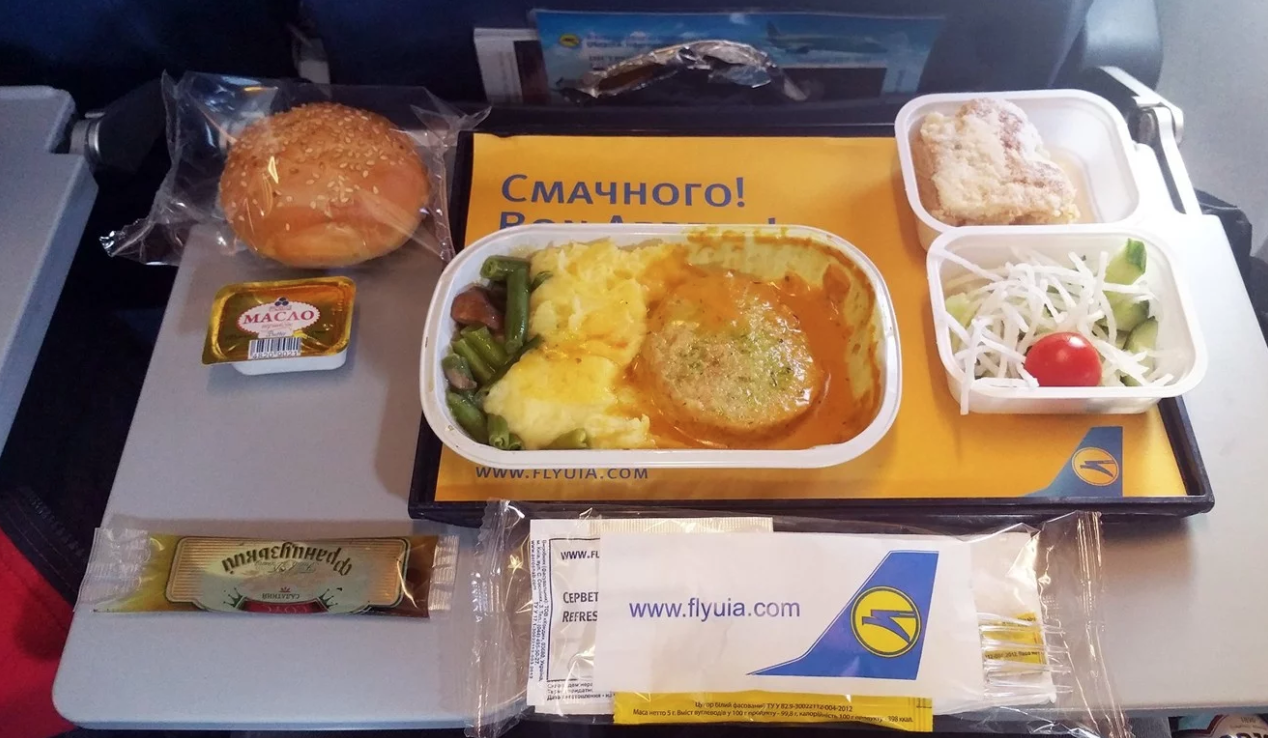 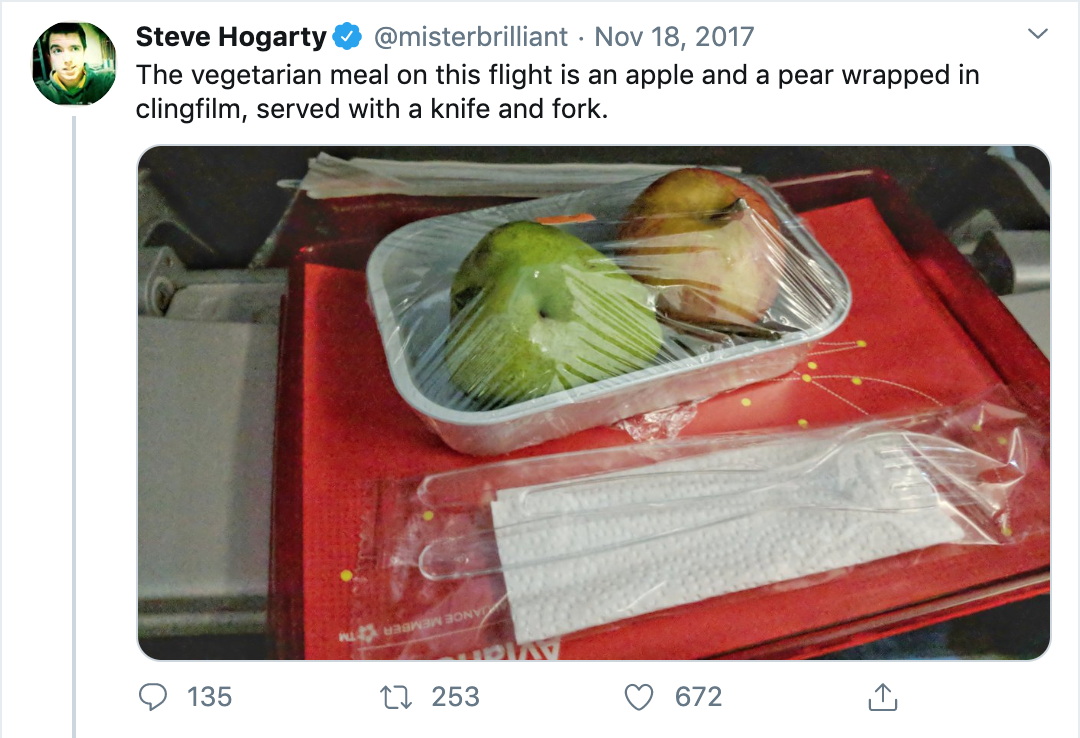 On a flight from London to Tokyo, Steve Hogarty got a pear and an apple for his vegetarian meal order which was served with a fork and knife. What’s even more ironic is the reply to his tweet, another passenger called Dave O’carroll also got fruits, but it was unwrapped and a bit sad-looking. As people become more health conscious, there’s a growing demographic of vegetarians and vegans that requires a bit more love from airlines. 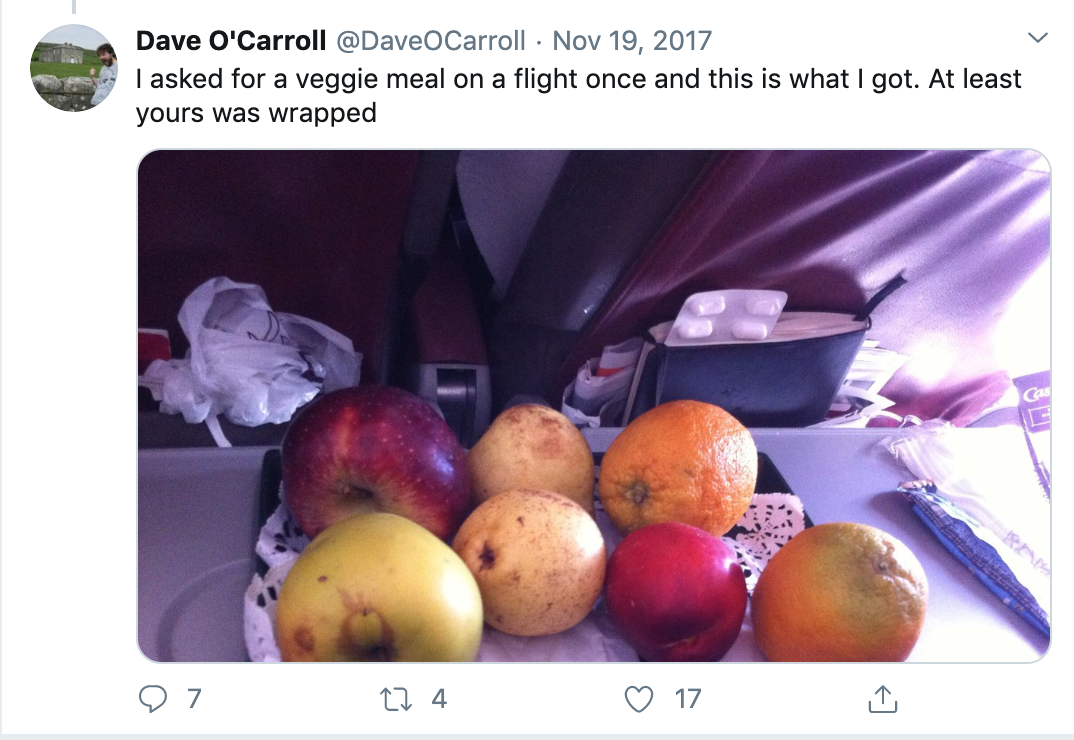 North Korea might be on your bucket list if you're an adventurous traveller who likes to explore the exotic and unconventional places. North Korea controls tourism strictly so only 4000-6000 western travellers would choose to visit North Korea per year. To get to North Korea, you’ll need to get on Air Koryo, the state-owned airline.

The airline only receives a 1-star rating on their food and beverages from Skytrax and this mysterious burger with unknown meat is viral online(not for good reasons). Vice regarded it as the legendary terrible burger. The ingredients of this burger consist of a slate bun, processed cheese, cabbage, and an unknown meat pattie. To make it worse, the burger was served cold straight from the fridge. 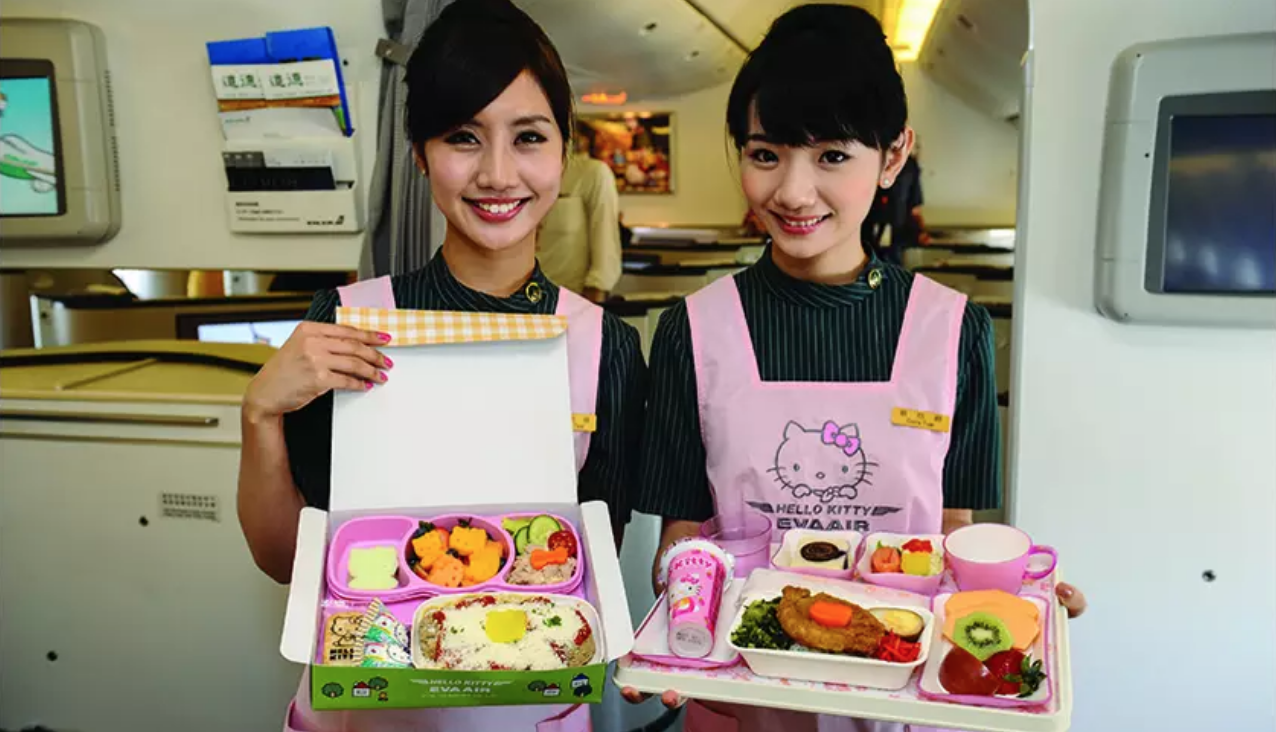 A very special meal stands out from all others, an anime themed meal. Eva Air partnered with Sanrio to launch a complete flight experience, from the painted plane to the interior, to pillows and meals - it's all covered with the infamous Hello Kitty and friends. Other than the overloading cuteness, the food itself looks very appetising. If you’re travelling certain routes, you can also get a Gudetama themed meal. Check out which route provides these special meals here. 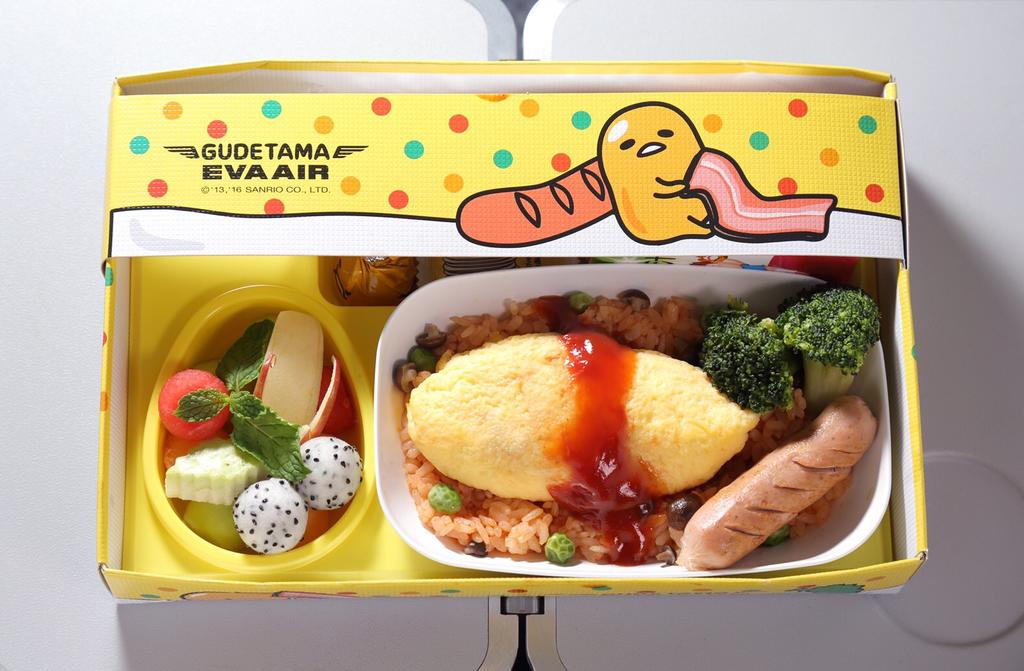 How are in-flight meals prepared?

Travel and Leisure has visited the catering facility of Emirates in Dubai to find out how meals are created, preserved and finally get served to all passengers on board.

Different food items are prepared differently. Hot food items are cooked to about 149 degrees and then sent to a spiral glass chiller. To ensure quality and hygiene of the food, they have a dedicated team to monitor chilled items for temperature before it’s taken into storage. Chefs will prepare meals 8 hours before a flight. Hot food items have a shelf life of 72 hours, but Emirates’ facility generally serves food within a 43 hour period.

How are in-flight meals reheated?

Airline regulations prohibit open flames on all commercial flights so all meals are reheated with a conventional oven by flight attendants.

What happens if the meals are not eaten?

Airlines are prohibited to reuse any of the leftover food in order to minimise the risk of spreading disease. Therefore, all the leftover food waste that would be regarded as garbage is vacuumed into an underground chamber and incinerated. We’ve all probably done it, leaving that small bag of peanuts untouched on our tray. To avoid food waste, we might want to take that in our carry-on with us next time.

Why you probably shouldn’t use or drink the tap water on board?

Dr. Charles Platkin has been studying in-flight food for the past 10 years and he conducted an Airline Water Study in 2019 on major US airlines. The research revealed that the quality of drinking water varies by airline and many have provided passengers with unhealthy drinking water. Even though there's a law in place called Aircraft Drinking Water Rule to monitor inflight water quality, Dr. Platkin commented on Healthline “As a traveller myself, I wouldn’t touch the water”. To avoid using the water on a plane, here are some of the measures that Dr.Platkin suggested:

If we want to understand the airplane food that we love and hate, we must understand a bit of its history.

Airplane food dates back to 1919 when Handley-Page served food on a flight from London to Paris. However, hot food wasn't available until United Airlines installed on-board kitchens in 1936. Air travel was fancy in the 50s and 60s and it’s seen as a luxury experience. Food was served with white tablecloths, fine china and extravagant beef and chicken dishes.

In 1978, the Airline Deregulation Act came out in the US,allowing low cost carriers to compete with high-class carriers. The competition drived airlines to cut back on cost, so domestic travellers were only served snacks like peanuts or even nothing at all.

Air travel was all about service and the overall luxury experience in the past. On the contrary, people today care about getting from point A to Point B in the fastest and most economical way, where food is no longer the top priority. Having said that, some airlines are still striving to create the best dining experience on board.