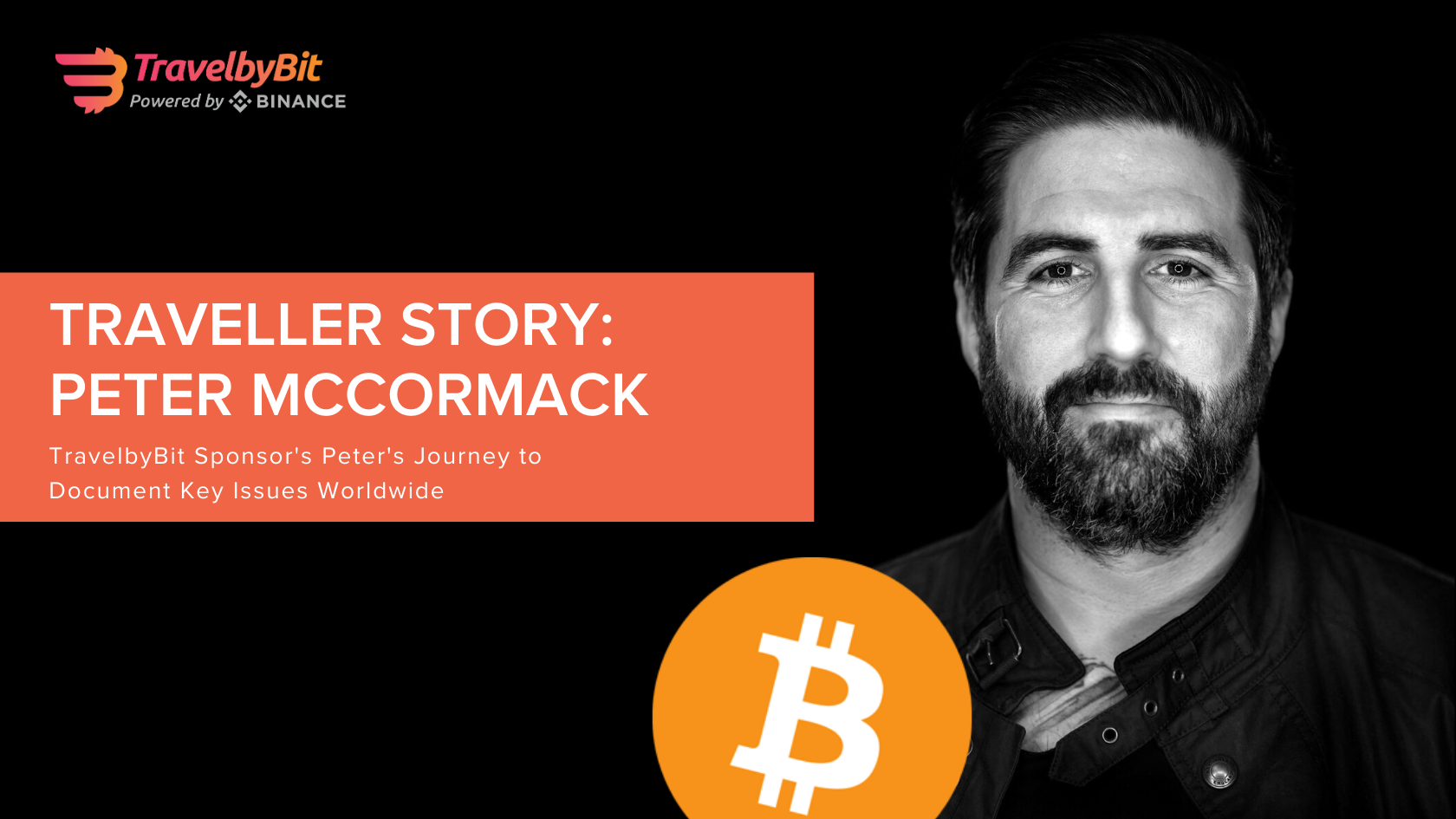 TravelbyBit is proud to be working with Peter McCormack on his journey to document critical issues around the world, starting from February 2020. Peter McCormack is no stranger to the bitcoin community. His influential podcasts, What Bitcoin Did and Defiance, interviews prominent figures all over the world providing valuable insight into the broader bitcoin community.

His What Bitcoin Did podcast series consists of interviews with a diverse list of experts worldwide. They share insights into bitcoin's future, developments, privacy, adoption and investment. In his latest podcast series, Defiance, Peter interviews the courageous people in countries facing unrest who challenge authority in their ongoing fight for freedom.

Peter recently revealed his plans to get into filmmaking. A video series is in the works to document his first-hand experiences on his recent trip to South America. The video series brings light to the ongoing social unrest in the different cities. It follows heart-breaking stories of how people are coping in dangerous situations, and how bitcoin is helping them in their daily struggles (see the trailer for the Defiance series here).

"Every country has a different (use-case) for bitcoin," said Peter, in an interview with TravelbyBit to learn about his experiences. "When you see it for your own eyes, you (really) get a picture of how tough life is and how fortunate we are."

His latest journey brings him to cities in South America to document and learn how they are using cryptocurrency. His trip brought him from meeting people fighting for their lives on the Venezuelan border to finding himself in the middle of a protest in Chile (follow his twitter for regular updates on his journey).

South America has been plagued with political and civil unrest in the past century. Venezuela's political and economic crises are a renowned humanitarian disaster. Chileans are angry about increasing public transit fares, electricity bills, education and pension regimes. The protests in Chile resulted in thousands injured and at least 23 deaths. It opened up an investigation led by the United Nations (UN) high commission, due to allegations of state-sanctioned violence.

Widespread dissatisfaction with governments all over the continent has fueled economic issues from country to country. The once-promising continent could have been one of the world's largest producers and exporters and would have flourished - if not for its political instability and corruption. As the social uprisings, military dictatorships, coups and escalation of financial problems continue, more people are turning to bitcoin as a tool to bypass financial institutes and their corruption. 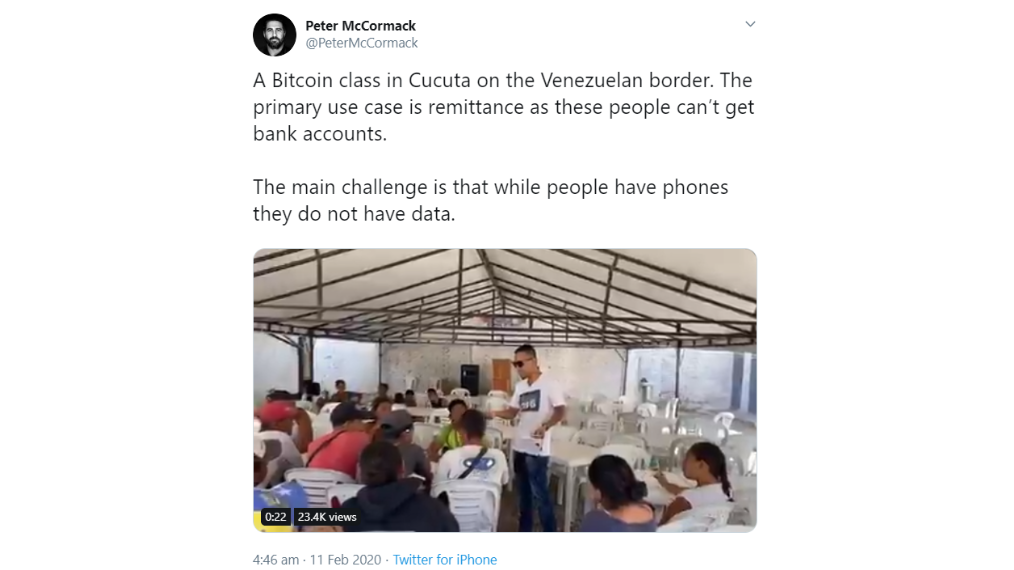 11 Feb 2020, Peter Mccormack’s tweet about the challenges of bitcoin adoption in Venezuela. Link.

"Bitcoin can't fix everything like people think it can," Peter explained. "It can help with certain things, but it's not going to change the government. When there is no culture of saving, a volatile self-sovereign cryptocurrency is unlikely the solution. People are more likely to keep dollars under the bed."

What's the role of cryptocurrency?

This year, with Brexit, Trump's impeachment and the increasing social inequality around the globe fueling tensions, what roles can cryptocurrency play in times of uncertainty?

Speculations of a global economic crisis have been gracing media headlines and discussions for months. The unavoidable interdependence between politics, finances and governments significantly affects world economies. Although how catastrophic it will be, when it all proves too much to bear, is unknown. Analysts are attempting to make sense of what effects political events would have on cryptocurrency. Bitcoin, coined as a 'safe-haven' asset, is known to be a store of value when another asset like fiat currency is rapidly losing value.

In developed countries, cryptocurrency is as anything but - as its' volatility is well-known. Often taken for granted, bitcoin is viewed as a potential investment and revenue driver in first-world countries. In a stark contrast, bitcoin is the top choice for protecting wealth in countries experiencing ongoing tensions like Zimbabwe. In Venezuela, due to increasing inflation, bitcoin is held tight and converted only until the need to spend bolívar on basic needs arise.

According to LocalBitcoin data, 2019 saw the highest exchange volume of bolivar converted to bitcoin in Venezuela. Likewise in Argentina, where people are generally more well-off than their neighbouring countries, bitcoin broke an all-time high in the same year. Prices rose as people scrambled to buy bitcoin - to use as a tool to preserve their wealth against hyperinflation.

Current financial systems are often undermined by political unrest, causing alternative currencies to rise in popularity. It provides people with an alternative form of money in the event dangerous situations escalate in their city. The exact effects of political changes and social uprisings are challenging to predict.

The possibility of cryptocurrency as a method of capital flight from countries with significantly less stable economies remains at large and could impact crypto prices. An increase in countries with troubled economies caused by recent political protests like Hong Kong, Indonesia, Iran, Lebanon, Egypt, Nigeria, Turkey and more have been surfacing. People in these countries find it challenging to move wealth out of the countries; or even converting them to EUR or USD. This further drives bitcoin as a popular option for storing wealth; driving bitcoin prices up as trust in banks and governments continue on a steady decline.

Although bitcoin does help people in many ways, there are still many factors that prevent it from being a reliable means of escape from dire situations. Frequent electric outages, limited internet access and the lack of liquidity provide significant hurdles to those looking for a way out. The people who do have access to these services do not need bitcoin; they are often of the middle or upper class. Peter emphasized that the people who needed help were not looking to download the latest bitcoin wallet. They only looked at their daily survival.

Cryptocurrency gives people the freedom to transact, holding the possibility of a means of escape out of the scariest situations in countries embroiled in tension. TravelbyBit is supporting Peter's travels and journey to spread the word of bitcoin through his platform. His podcasts show the rest of the world how and why people turn to bitcoin, and most importantly, the challenges they face in their very homes. TravelbyBit's mission is to make crypto travel possible to provide users with a way to utilize crypto in their daily lives - and to help people escape these situations potentially.

TravelbyBit allows you to pay for your flight and hotel bookings with cryptocurrencies such as BTC, BNB, LTC, USDT and credit card. Regardless of how you choose to pay, TravelbyBit rewards you up to 10% in Bitcoin for every booking you make. If you haven’t tried TravelbyBit, Use coupon code “TBBBLOG” to get US $20 travel credits (Valid for 6 months) for your first trip. To claim travel credits, sign up for a TravelbyBit account at https://app.travelbybit.com/signup and connect your TravelbyBit account with your Binance , Google or Facebook account before 4th May 2020.

Select the travel credit section in your TravelbyBit account and type in coupon code “TBBBLOG” to activate your free $20 credits. If you have any questions, please contact us at [email protected]