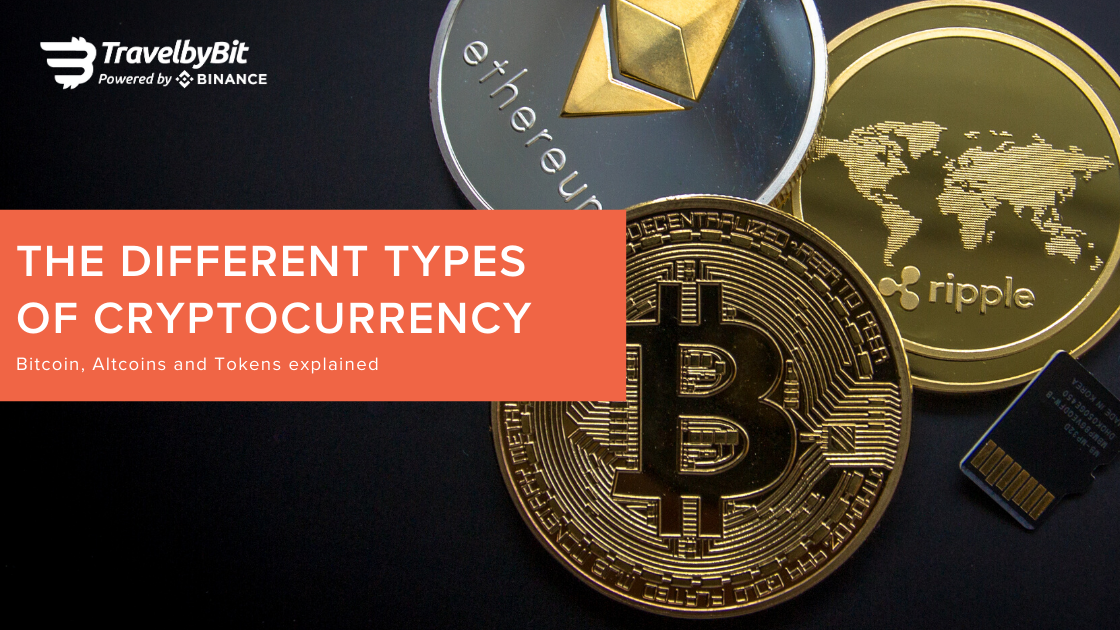 5 April 2020
The different types of cryptocurrency

There are 3 main types of cryptocurrency: Bitcoin, alcoin and token. 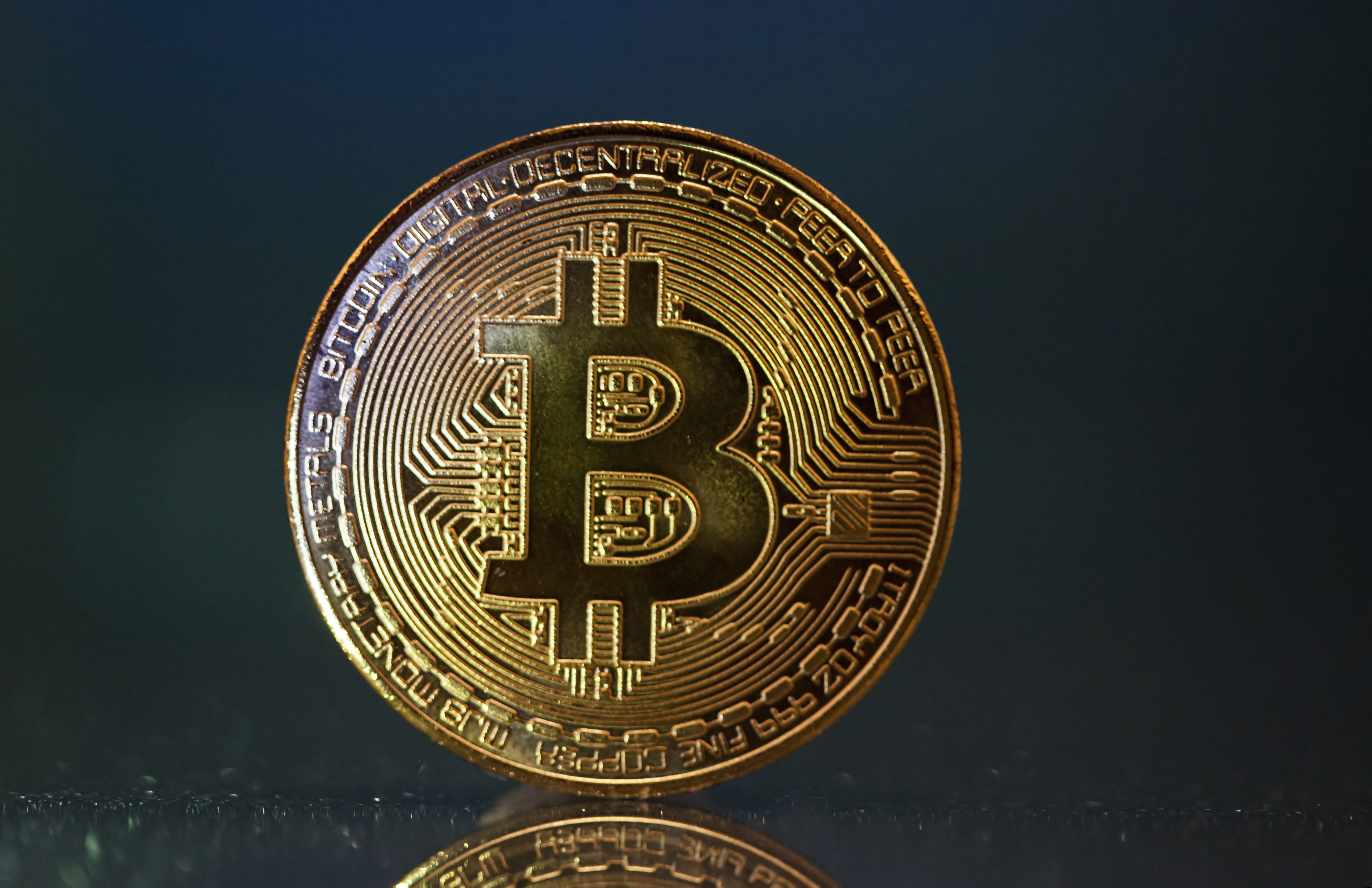 Bitcoin is the first and most well known cryptocurrency. As of March 2020, the market cap is over 123 billion and it occupied over 60% of the crypto market. Bitcoin is truly like no other because there’s no reliance on central banks or governments. Bitcoin transactions are decentralized, they are made on the peer to peer network and verified by the network nodes, then recorded in a distributed public ledger called the blockchain. Bitcoin is decentralised thanks to the network of miners who helps monitor the bitcoin network. To incentivise the miners, they receive a reward whenever they complete a block of verified transactions which is then added to the blockchain.

The bitcoin white paper was revealed in 2008 by an anonymous person or a group known as Satoshi Nakamoto. The true identity of Satoshi remains unknown till this day. Due to its finite supply of 21 million, bitcoin is often regarded as digital gold as an alternative way to store value. Some also see it as digital cash that can be used internationally. As bitcoin progresses as a currency, major companies like Microsoft and Wikipedia have started accepting bitcoin as a form of payment.

Altcoins means alternative coins, coins that are alternatives to Bitcoin. Bitcoin’s technology and vision have inspired the creations of many other cryptocurrency that serves many different purposes. 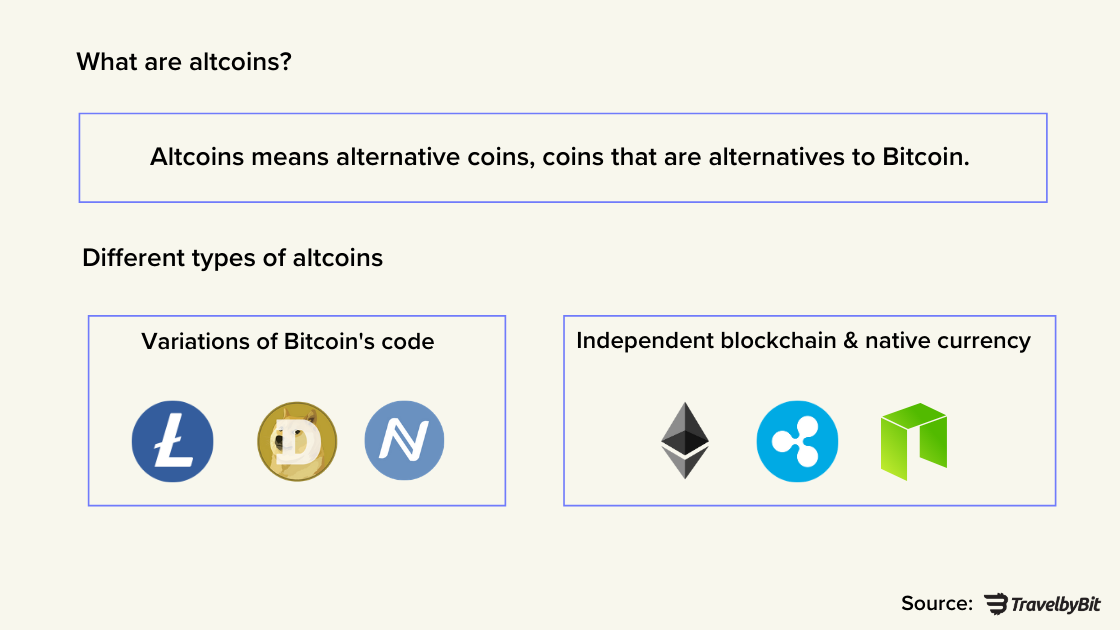 Before we dive into introducing other types of altcoins, we need to first explain what is forking. Forking is a software or a protocol update. Forks generate a second version of the blockchain, so it leaves 2 blockchain to function concurrently. There are 2 main types of forks, Hard Fork and Soft Fork.

There is an estimate of 5000 alcoins in the market. Most of the coins are only a variation (a fork) of bitcoin. Bitcoin is open sourced which allows projects to make changes to the original protocol and launch a completely new coin. This can be regarded as a hardfork, when the open source codes are modified to create a new coin.

An example of a soft fork would be segwit, a scaling solution for bitcoin that was switched on in 2017. Segwit is a protocol update that increases the number of transactions in any bitcoin block by splitting the blockchain.

There are also projects that set out to be something completely different to Bitcoin. The most well known would be Ethereum, a platform that enables projects to build apps and Tokens on blockchain. Projects like Ethereum, Ripple and Neo all have their own independent blockchain and currency.

Proof of work and Proof of stake 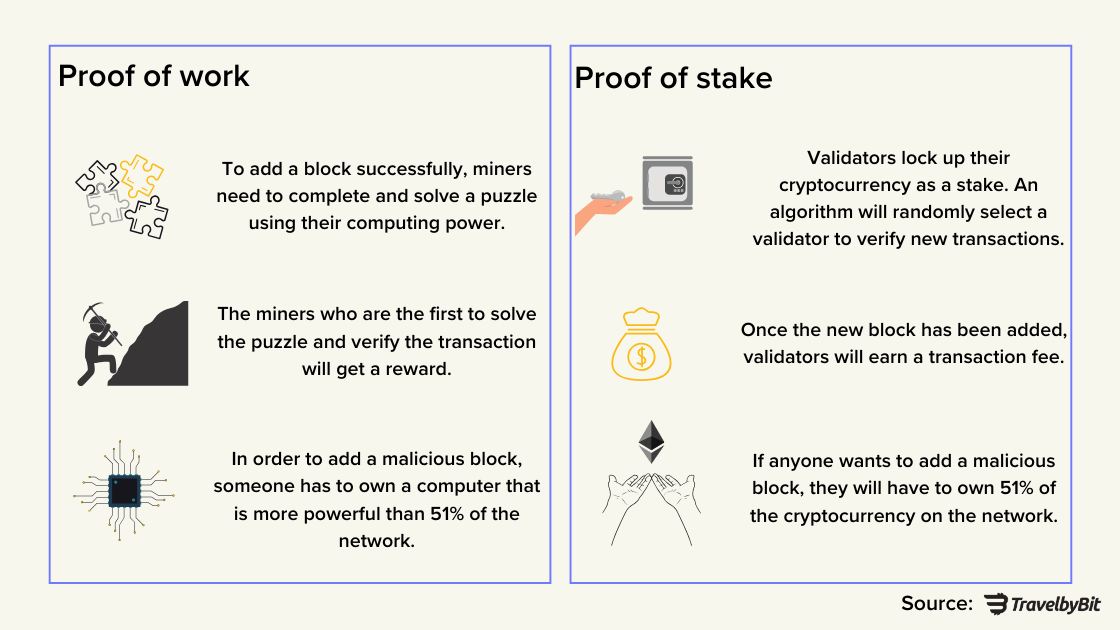 Proof of work is a protocol that prevents cyber attacks. In the bitcoin whitepaper, Satoshi used the proof of work to ensure the network stays trustless and the consensus distributed. To put simply, to add a block successfully, miners need to complete and solve a puzzle using their computing power. The miners who are the first to solve the puzzle and verify the transaction will get a reward. In order to add a malicious block, someone has to own a computer that is more powerful than 51% of the network. Therefore, it’s almost impossible to “hack” bitcoin or other cryptocurrencies that use proof of work. While traditional financial transactions require a third party like Paypal to be the centre authority, bitcoin requires none. Cryptocurrency is also transparent as all transactions are recorded on a distributed ledger called blockchain. Other cryptocurrency that utilize proof of work are Ethereum, Litecoin, Menero, Dash, Zcash etc.

Proof of stake on the other side requires validators instead of miners. Validators need to lock up their cryptocurrency as a stake. An algorithm will randomly select a validator to verify new transactions. Once the new block has been added, validators will earn a transaction fee. If anyone wants to add a malicious block, they will have to own 51% of the cryptocurrency on the network. Cryptocurrency that utilize proof of stake are EOS, Steem, Tron etc.

Vatalik has been thinking of switching Ethereum to the proof of stake system since 2014 and he thinks it as the key of Ethereum reaching maturity. As no mining is required, it will significantly reduce the electricity used for mining. Some think that Proof of stake will make Ethereum more scalable and secure. Ethereum 2.0 is set to launch in Q1 of 2020, it would be interesting to see what impact it brings to the whole ecosystem.

Other categories for altcoins 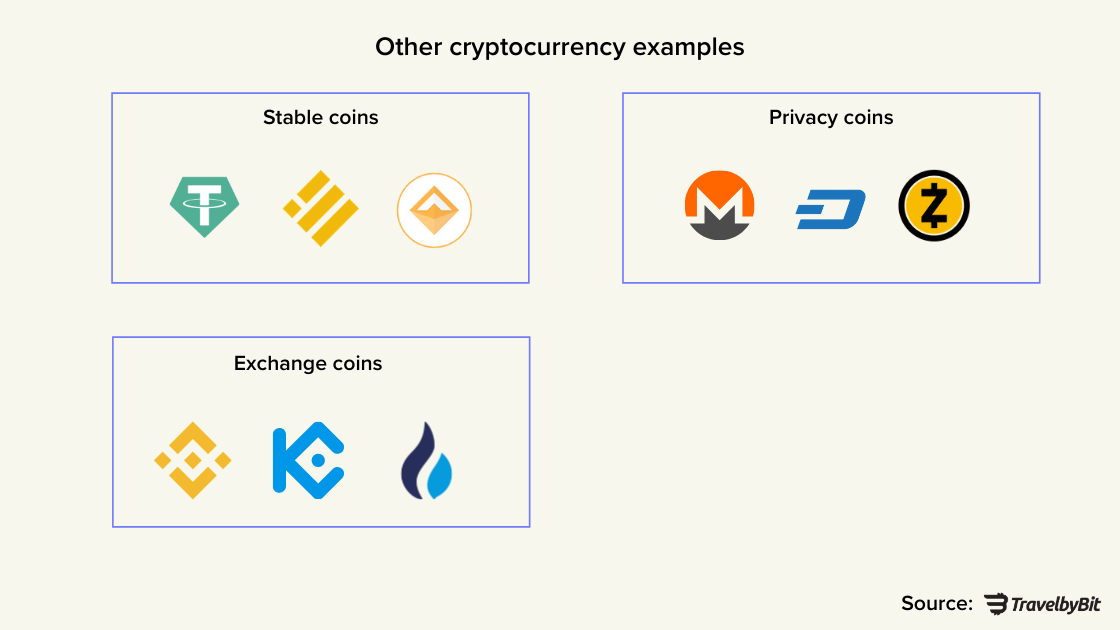 Stable coins It’s pegged to either a cryptocurrency, fiat currency or a commodity. It minimises the volatility in price significantly. Some examples for stable coins would be Tether, Dai and Paxos.

Privacy coins It’s designed to provide private transactions. The system protects data of its users such as their identities, the amount of cryptocurrency they own or how much they hold in wallets. Some examples of privacy coins would be Monero, Zcash and Dash.

Exchanges coins It’s created by cryptocurrency exchanges and the coins are used on the trading platforms or related services. Some examples would be Binance Coin, Huobi Token and KuCoin.

The fundamental difference between alcoins and tokens is tokens are generated from Initial Coin offerings (ICO).

The launch of different blockchain, such as ethereum, allows the creation of many tokens that represent different assets or utilities. Tokens are tradable so it can be implemented in a variety of industries. People often joke about there’s a coin for everything in the ICO bloom in 2017, from commodities to loyalty points, anything you can think of, people have created a token for that.

The creation of a token is surprisingly easy, it’s similar to the traditional Initial Public Offering (IPO) that we are familiar within the stock market. Rather than shares, you get tokens instead in an ICO. ICO Projects crowdfund by issuing new cryptocurrency and investors will invest to support the project development and potential financial return. 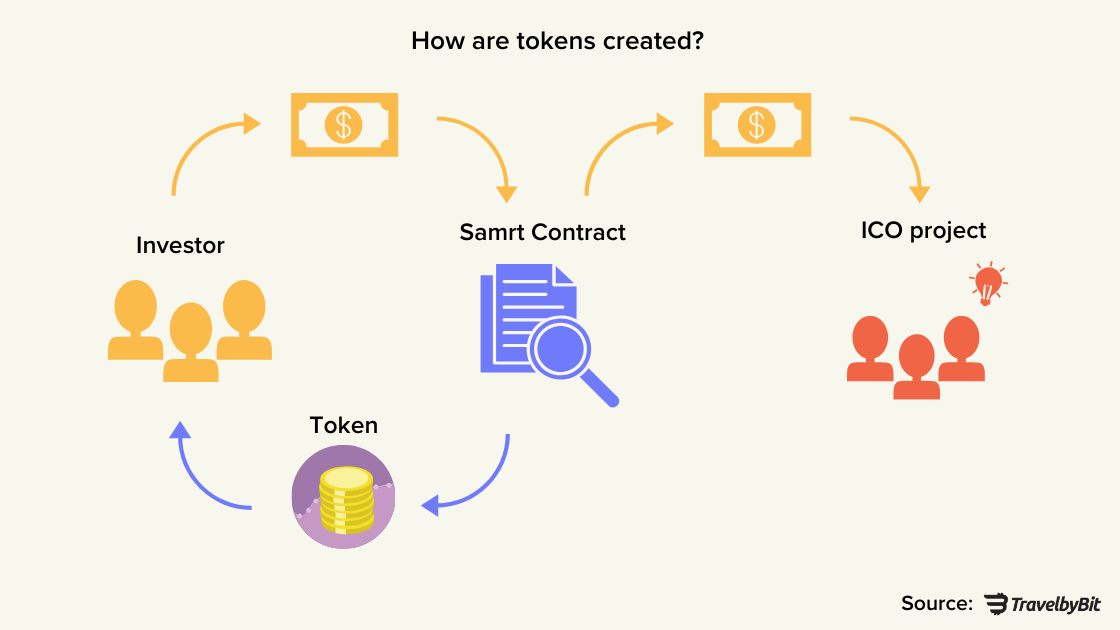 Smart contract technology automates transactions when certain triggers happen. Bitcoin enables payments to be made without intermediates, while smart contracts expands the use of blockchain to other industries like real estate or the stock market.This technology expanded the usage of the blockchain and assisted the process of ICO.

Token is not a currency, they are merely a symbol of a contract. Therefore, investing in ICO projects in return for tokens is highly risky as the price of the token is not determined by mining or tied to any commodity. Investors are betting on the delivery and success of the project, just like you’re lending money to a friend to help them start up a business.

The most common form of token would be utility tokens, millions of dollars were raised during 2017’s ICO craze. Token holders have the right to use the network and they have the voting power in the ecosystem. It’s like building an internal economy. For example, Power Ledger is one of the ICO projects that enable energy trading on the blockchain. Users can transact energy using their POWR token.

The most popular way to launch a new token would be through the Ethereum blockchain. The tokens generated are called ERC20 tokens.

In this article we only covered the differences between different types of cryptocurrencies, as cryptocurrency is new and constantly evolving, you should always do your own research before making any financial decisions.

If you’re looking to buy Bitcoin in Australia, Binance Lite provides a secure and reliable cash-to-bitcoin service, through internet banking transfer or a network of 1300+ supported newsagents across Australia.