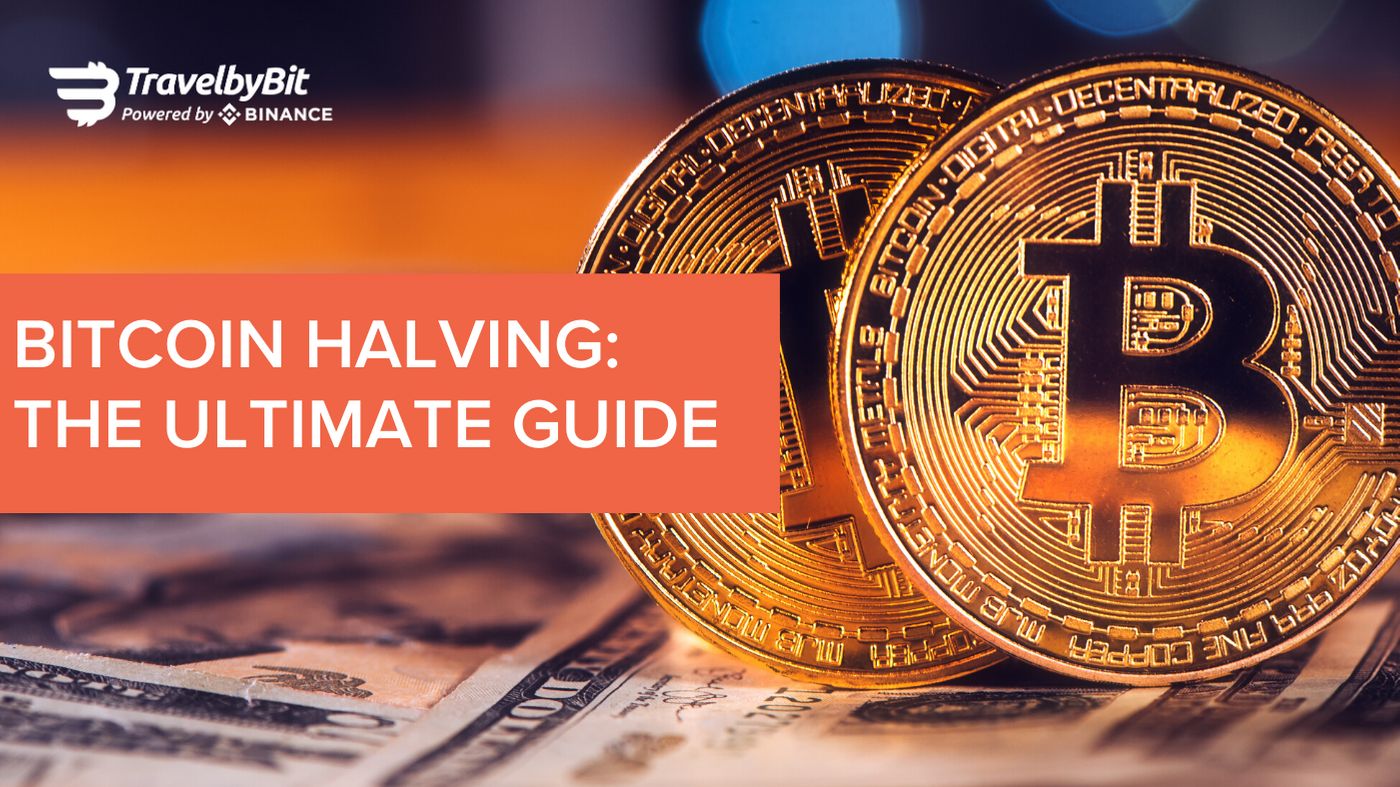 Bitcoin and the Halving

You may have heard of Bitcoin and probably know of it as some form of magic internet currency which has provided a lucky group of people a sum of unimaginable wealth. Some call it the next evolution of money, some say it is a scam that will benefit the people at the top, and some may think that it is a “fad” that has passed. Despite the times where Bitcoin has come and gone from the media headlines, the fact is that it’s still here, and it’s technically stronger than ever.

Firsty, Bitcoin is secured by an ever increasing number of “miners” that do work for a reward in Bitcoin. This mining reward (or block reward) is packed into “blocks” that are produced roughly every 10 minutes, and consist of a predertimed number of Bitcoin and the sum of transaction fees. As the amount of mining work, or “hashrate” increases, the more secure Bitcoin becomes. As we can see below, the current hashrate is near an all time high. 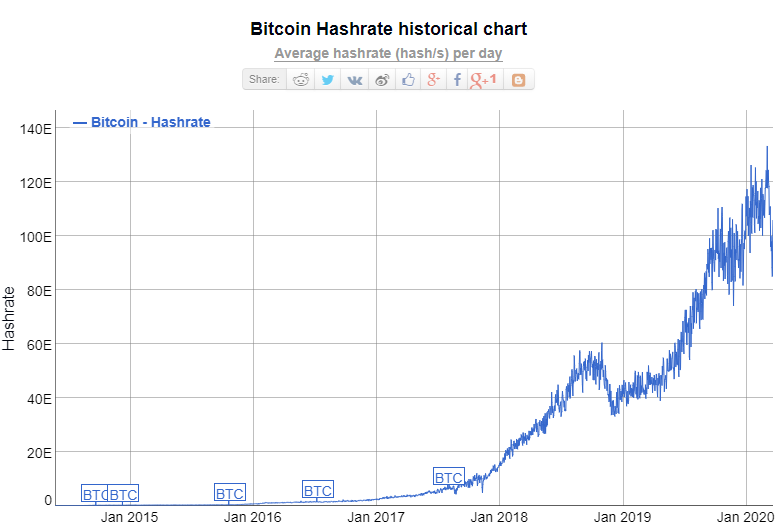 As the number of users grows as well as the hashrate, Bitcoin’s core properties become increasingly harder to change. The property in question is the fact that the block reward decreases every 210,000 blocks or roughly 4 years, which is known as the halving. When Bitcoin was first launched in 2009 the block reward was 50 Bitcoin, which was then “halved” to 25 in 2012, and then to 12.5 in 2016. The Bitcoin block reward will continue to get cut in half every 4 years until approximately the year 2140, when the miners will be paid purely in transaction fees. As we can see in the chart below, the block reward (Inflation) decreases at a rate which will produce 21,000,000 Bitcoin (Monetary Base) by 2140. 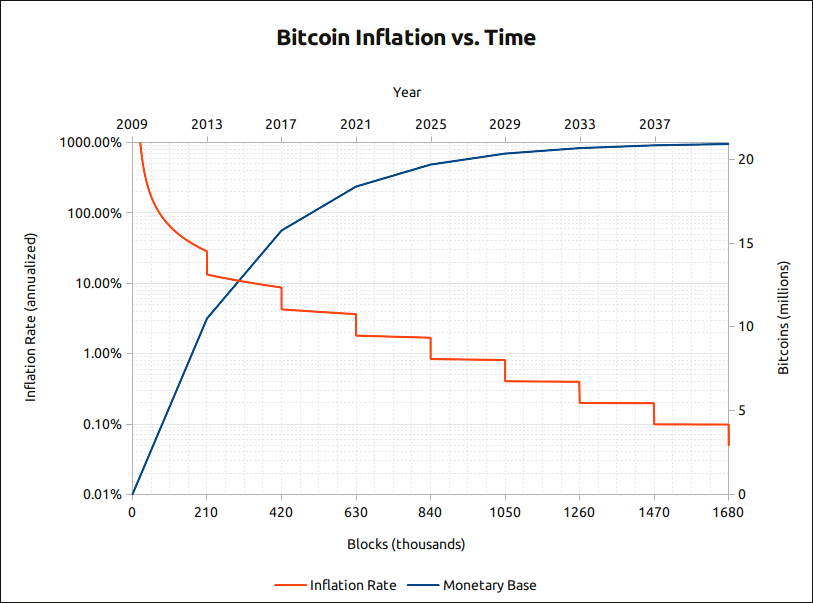 Watch out Gold, Bitcoin is Catching Up

Gold mining has long been a steady source of accumulating wealth, punctuated with periods of “gold rushes” where prospectors flock to gold mines in the hopes of striking big. Despite the gold rushes and periodic changes in demand for gold, the actual “amount of gold mined” compared to the “amount of gold being mined” has stayed relatively constant. This is known as the stock-to-flow ratio (S2F), as in the amount of stock (gold already mined) compared to the rate of flow (the rate of gold being mined). Most commodities have a steady S2F ratio, which makes it a useful tool in determining the relative “scarcity” of something. Gold for example has a S2F of 62, silver is 22, and platinum is 0.4. As a rule of thumb, the higher the S2F number, the harder the asset is to acquire/produce.

Since we know how much Bitcoin is being produced in the block reward compared to the amount of bitcoin in circulation, we can calculate Bitcoin’s S2F ratio. Currently the Bitcoin S2F ratio is roughly 25 which makes it a contender against silver, but will it stay constant? The answer is no, as we saw earlier the Bitcoin supply decreases over time, which results in an overall increase of Bitcoin’s S2F ratio.

The next halving event is set to occur around May 9 2020, where the S2F ratio will jump from around 25 to 50, placing it higher than silver but just behind gold. Over time Bitcoin will obtain an S2F ratio higher than that of Gold, creating the first ever digital good to be scarcer than gold. If you want to read more into the S2F model of Bitcoin, check out Plan B's article.

What Effect does the Halving have on Price?

So now that you have a basic idea of what the halving is, you’re probably wondering what it means for the main popular speculation point of Bitcoin: price. As with anything in the financial markets there is no sure-fire way of saying exactly what will happen, however we can still look at what has happened based off basic supply-demand theory and also the historic price moment around the previous two halvings.

Firstly, let’s look at the implications of the halving from a supply-demand point of view. Currently the mining reward is 12.5 BTC per block, which is produced roughly every 10 minutes. Expanding this out, we get roughly 1,800 Bitcoin produced daily. At the current market price of $6000 USD that means $10,800,000 of BTC is being bought up every day. Once the halving occurs, that same inflow of capital will be allocated to half the amount of Bitcoin essentially creating a supply shock.

The main assumption in this case is that the capital set aside to purchase the freshly mined BTC will stay the same, which is something we cannot predict. The supporting argument for this case is that those same people and/or funds that are currently buying Bitcoin will continue buying into the future due to the same reasons they are buying today - ie. Bitcoin is ultimately a scarce asset which should increase in value over time due to its hard-money properties.

When looking at the previous two halving periods on the Bitcoin chart (in logarithmic scale), we can see there is a distinct “cyclical” movement in the price. The theory behind this is that the supply shock and collective knowledge about Bitcoin is delayed due to it still being in its infancy (not everybody knows about it). Furthermore, studies show that the Bitcoin price has historically followed the S2F model closely, which predicts a price tending towards $1,000,000 USD per Bitcoin around the year 2024. 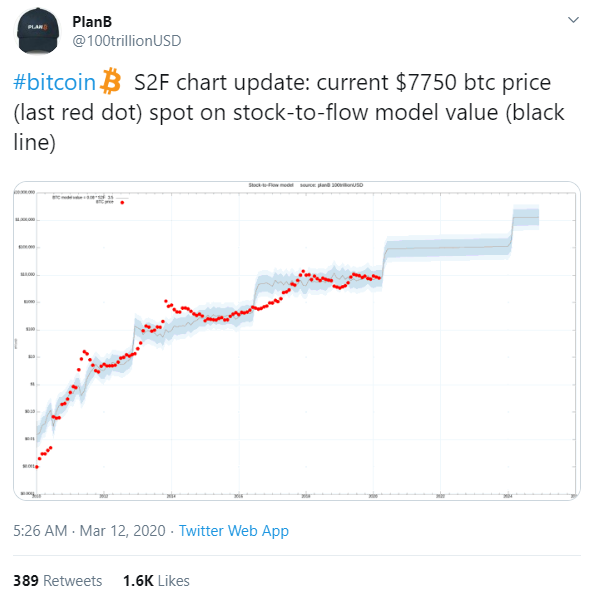 Plan B (originator of the S2F model) Link

At the end of the day, technical and fundamental analysis of any asset can only tell us so much. We must remember, Bitcoin is only 11 years old and it’s impossible for it to become a multi trillion-dollar market cap asset overnight.

As we move into increasingly uncertain times we can be sure of one thing: there will only ever be 21,000,000 Bitcoin. While governments are constantly changing their monetary policies and inflating currencies such as the AUD and USD to promote “economic stimulus”, Bitcoin will continue to march to the beat of its own drum.

If you are considering purchasing a small amount of Bitcoin or are curious to explore how it all works, websites like binancelite.com are easy and simple to use. For a more in depth look at various ways to buy Bitcoin, head to The Ultimate Guide: How to Buy Bitcoin in Australia.

The world is changing, and the next few years may introduce some of the hardest challenges as well as the most amazing technological advancements we have ever seen.

“As this all unfolds, Bitcoin waits patiently. Producing blocks with open arms for those who seek refuge from the madness.” - Marty Bent

What people are saying:

The model predicts a Bitcoin market value of $1trn after the next halving in May 2020, which translates in a Bitcoin price of $55,000.”

Hard to imagine a better stage for Satoshi's press release about tightening bitcoin's new supply by another full 50%. (Halving = May 13)”

“Unlike most Bitcoiners, I don’t think the halving is particularly bullish. I am of the view that most people with a Bitcoin position understand that it’s capped in supply, so the issuance change shouldn’t make a difference.”