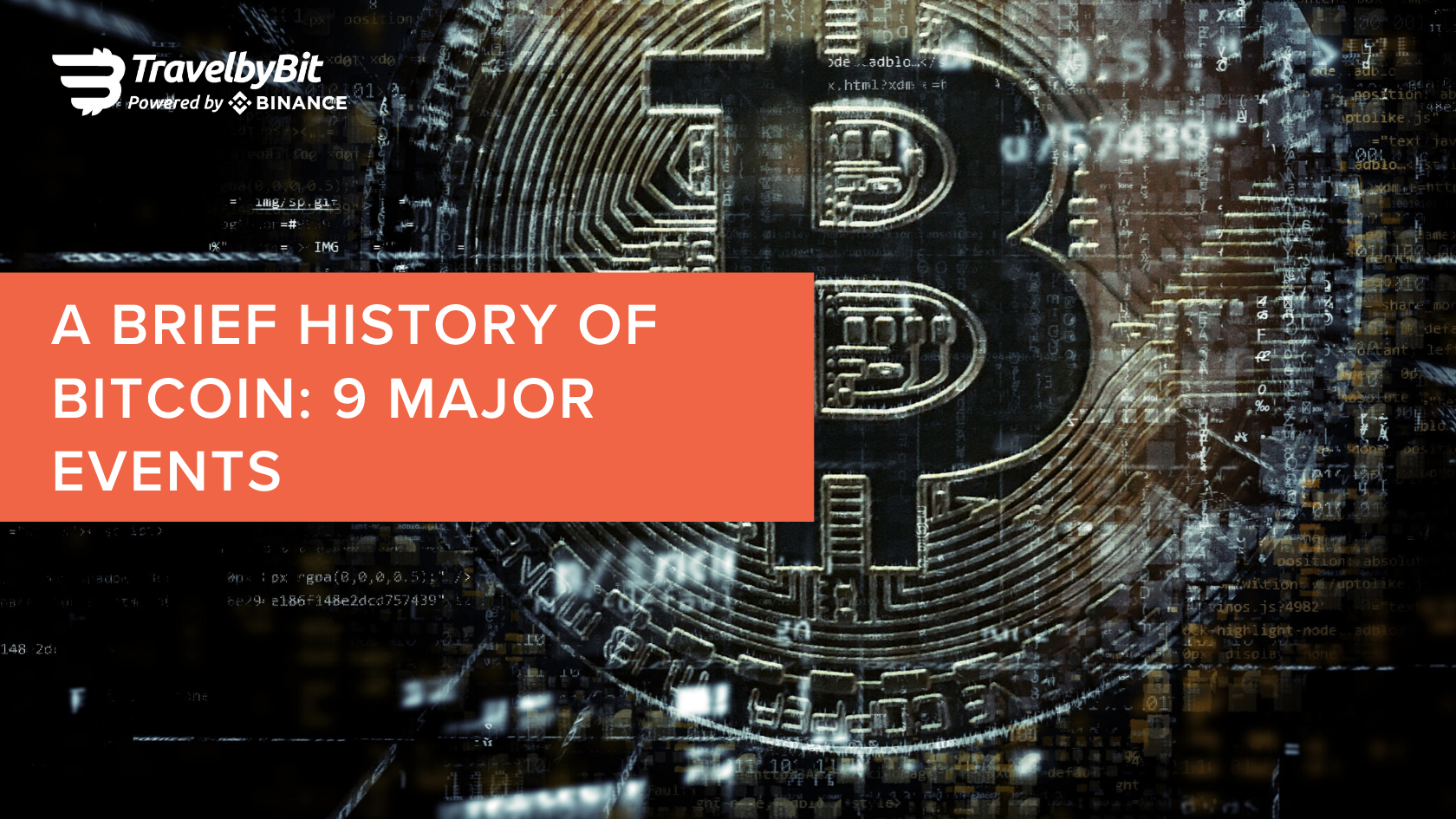 Bitcoin first emerged over 10 years ago. It has thrived ever since - many not knowing of the highs and lows that it has battled throughout the years. The compilation of bitcoin’s significant moments mentioned in this article have all played a role in changing society’s perceptions of finance and governments in a short period of time. As the date for the 2020 halving draws nearer, let’s look back on some of the unforgettable moments that have happened in the past decade.

A decade before Bitcoin came into existence, the idea of cryptocurrency was well underway. Ideas were being explored and discussed in the early days of the internet by a community of engineers and cyberpunks. In 1998, a computer engineer by the name of Wei Dai published a paper discussing the concept of digital currency called ‘B-money’. He discussed the idea of having a form of money that was an anonymous, distributed cash system without any third-parties. This consisted of two methods:

1) every participant to the network would maintain a separate database of how much money belongs to all users,

2) all records are to be kept by a specific group of users who will be incentivised to be honest about their funds and will stand to lose them if they are not.

The latter method is known as ‘proof-of-stake’ (POS), whereby specific groups of users will lose their funds they have staked if they attempt to process fraudulent transactions.

Later that same year, blockchain pioneer Nick Szabo introduced the idea of ‘Bit Gold’, echoing the idea of decentralized money inspired by the inefficiency of traditional financial systems. While both concepts never came to fruition, they went on to contribute greatly to the beginnings of Bitcoin.

Anonymousspeech.com, who specialises in creating anonymous domains, received an application to register Bitcoin.org by an unknown entity. However, the founders displayed on the website itself are no other than Satoshi Nakamoto and Martti Malmi.

A notable day for many bitcoiners, it is widely assumed the day that bitcoin was officially ‘born’. Satoshi Nakamoto published a white paper titled “Bitcoin - A peer-to-peer electronic cash system,” the initial nine-page document outlining a digital currency that does not rely on traditional financial systems to function. It was distributed on a cyberpunk mailing list in November 2008.

The paper consisted of 11 sections with detailed descriptions of how bitcoin works. Transactions, proof-of-work, simplified payment verification and privacy were among the few things mentioned in the paper. On 3 January 2009, Nakamoto brought it to life by creating the Genesis Block, the first block on the blockchain. It contains 50 BTC, remaining untouched and untouchable (due to the way the code for this particular block was written) up until today, further fueling the mystery that surrounds Nakamoto.

The creation of block zero marked a symbolic beginning for Bitcoin amidst the global financial crisis in 2009. Within the block, one can see a phrase inscribed by Nakamoto: "The Times 03/Jan/2009, Chancellor on the brink of second bailout for banks," a reference to a newspaper article from The Times with the exact headline that was published that very day.

An event that bitcoiners look back on with humour, Florida-based programmer Laszlo Hanyecz made an offer of two Papa John pizzas for 10,000 BTC on an online forum on 17 May 2010. A few days later on 22 May, fellow user Jeremy Sturdivant accepted the offer, where 10,000 BTC would be around US$30 at that time. Today, that same pizza order would have cost you (or rather Hanyecz in this case) a whopping US$68 million. Talk about having ‘dough’.

A dark web marketplace that emphasised keeping their users’ identities private, it sold anything from drugs to weapons. Accessible through the Tor browser, BTC was the preferred method of payment among Silk Road users. On 2 October 2013, Silk Road’s founder Ross Ulbricht was arrested by the FBI while he was logged into the server in a public library.

One of bitcoin’s first lows, this created a negative connotation with the general public. The price dropped from around US$145 to US$109.

The first exchange platform for trading BTC was Mt. Gox, launched by Jed McCaleb in mid-2010. He then went on to sell the exchange to a Japan-based, French businessman, Mark Karpeles. Once a promising platform, it grew significantly in terms of its popularity and transaction volumes. However, it started to face cash-flow issues by late 2013.

On 24 February 2014, the platform abruptly stopped all trading, followed by leaving users hanging when going offline. A few days later on 28 February, Mt. Gox filed for bankruptcy protection in Tokyo. The filing described that the platform allegedly had ‘technical difficulties’ and had been robbed of over 850,000 BTC belonging to its customers. Mark Karpeles resigned from his position on the board of the Bitcoin Foundation amid outrage and controversy surrounding the exchange.

By far the largest alleged theft in bitcoin’s history, the current value would bring it to US$3 billion (US$460 million at that time).

2015, The Start of Mainstream Adoption

On 31 October, bitcoin made the front page of The Economist. Global corporations and big-name companies were slowly adopting Bitcoin amid the wave of negative perceptions toward the digital currency. The year before on 11 December 2014, Microsoft began accepting Bitcoin payments, marking a huge positive milestone for bitcoiners. 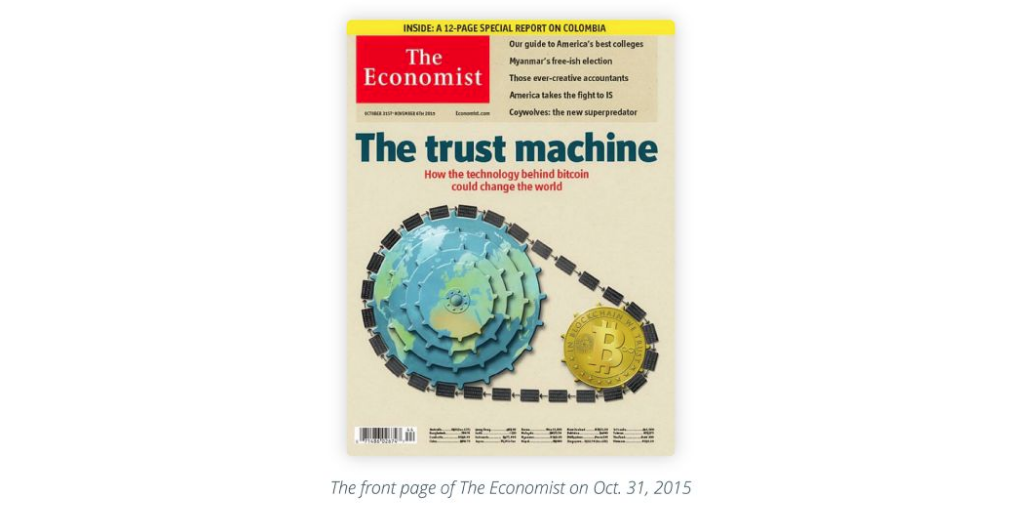 The start of the year marked the biggest bull run for cryptocurrency and its acceptance into the mainstream. The Winklevoss twins, who sued Facebook founder Mark Zuckerberg for the theft of intellectual property that led to the creation of the platform, graced headlines on 10 March 2017. The twins had filed for an application to launch the Bitcoin Exchange-Traded Fund (ETF) which was turned down by the United States Securities and Exchange Commission (SEC).

On 11 June that year, Bitcoin shot past an all-time high of US$3000 while discussions and debates were being held around scaling issues that were affecting Bitcoin. This led to a hard fork from the original Bitcoin blockchain on 1 August 2017 - leading to the launch of Bitcoin Cash. The price of Bitcoin continued to climb, bringing it to US$5000 on 2 September.

As Bitcoin gained momentum, discussions were rife in the financial world with opinions split right down the middle - a famous comment by JPMorgan Chase CEO Jamie Dimon calling Bitcoin a “fraud”. China banned ICOs and cryptocurrency exchanges from operating within its borders.

Bitcoin broke into a bull-run in October, surpassing US$10,000 for the first time on 29 November that year. Investors scrambled to get into the action, fueled by perceptions that the launch of Bitcoin futures in December would mean an influx of institutional funds into the digital currency and further stimulate the price. Bitcoin breached US$20,000 in December - a record-breaking high, while finally going back down to US$13,000 by the end of the month.

The Lightning Network essentially acts as a shortcut for users. Relying on the technology of the blockchain, it uses smart contract functionality to enable instant payments across a network of users. It adds another layer to Bitcoin’s blockchain, allowing users to create payment channels between any two parties that exist on that layer. Transactions would be almost instant and fees will be significantly lowered - sometimes no transaction fees need to be paid by the users at all. Described in a white paper created by Joseph Poon and Thaddeus Dryja in 2015, three main teams (Blockstream, Lightning Labs and ACINQ) undertook the task of developing the Lightning Network along with input from the rest of the community (learn more about it on lightning.network).

What’s Next for Bitcoin?

With arguably the most important date of Bitcoin coming up this May 2020, many are looking forward to the halvening (or halving as some may call it), and how it will affect Bitcoin’s price.

Bitcoin has been through many highs and lows, with many more unforgettable and life-altering events that will continue to change and alter society’s perceptions of money. It will continue to raise questions surrounding traditional systems and structures as we see it become more and more accepted within mainstream society.